The town of Bansberia is a municipality in Hooghly district of West Bengal State. The city comes under the Chinsurah Subdiv’s Chinsurah or Mogra Police Stations. The town lies in the western end of Kalyani Bridge. A small portion of the town is covered by the Kolkata Metropolitan Dev. Authority. Bansberia is situated about 4 kms away from Bandel on the branch line of Bandel-Katwa. 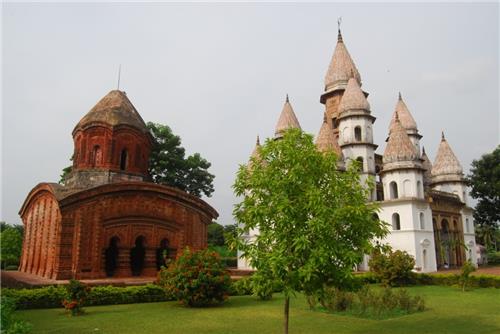 Geography and Climate of Bansberia

Bansberia used to be one of the major villages of old Saptagram which was the commercial complex and main port once upon a time. Since the town is located at the convergence of 3 rivers- The Ganga, Jamuna and the Saraswati (also known as the “Tribeni”), Bansberia has always been a place of religious importance. After the place was occupied by the Muslims in late thirteenth century, the town attained the status of as a mint town, military base and a port. During the mid sixteenth century when the Mughals had captured Bengal, the city started deteriorating owing to the loss of majestic patronage. However, some places like Bansberia kept flourishing until the nineteenth century.

There are mainly 2 large-scale industries in Bansberia- 1) Ganges Jute Private Limited and 2) Dunlop India Private Limited. The Ganges Jute industry is famous for the jute product manufacture while the Dunlop India produces car tyres and related products. There are also a handful of small-scale industries in the town. Besides these the other sources of employment are- household industries, cottage industries, transport operators and transport, photocopying services, telephone booths, food stalls, laundry services etc. All these contribute to the overall economy of the town. The craftsmen of Bansberia are skilled in making earthen potteries and toys. They are also expert in crafting brass and bronze items. The local handicrafts of the place also contribute majorly to the economy of Bansberia.

There are very limited number of hospoital;s and nursing homes in Bansberia town that boast of an experienced medical staff and are well-equipped with the latest medical tools to bestow the citizens with the supreme healthcare services. There are two I.P.P.-8 centers, two ambulance services, five I.C.D.S centers and one very reputable hospital known as the “Rotary Hooghly Eye Hospital”. Apart from these, there is also a Maternity ESOPD Centre which has six specialist doctors to serve the patients. Below are the contact details of the Rotary Hospital in Bansberia:

The town offers numerous sites of religious importance to the tourists. The Hooghly River’s Tribeni Ghat is a must-visit place of the town. Bathing in the Tribeni Ghat is almost a daily ritual for the locals and tourists from the nearby cities flock the Ghat during festivities to take holy dip in the river. The Hangseshwari and Ananta Vasudeva are among the most well-known temples of Bansberia. The following is a brief description of all the famous places of attractions located in Bansberia:

Hangseshwari Temple is famous for its unique style of architecture. This temple consists of 13 minars and each minar has a shape of lotus bud. Goddess Kaali is the main deity of this temple. The inner layout of this temple pursues the human anatomy. This temple was initiated by the Raja Nrisingha Deb Mahashay and was finished by his wife Rani Sankari after his death.

The Ananta Vasudeva Temple is built in traditional ekaratna architectural style. This terracotta temple comprises curved cornices and also has a tower with octagonal shape. This shrine is dedicated to Shri Krishna. The walls of this temple are adorned with beautiful terracotta works that represent war scenes, love, deities and glances of daily life. This famous shrine was constructed by Raja Rameshwar Datta in 1679 who was a devoted Vaishnav. This temple lies within the complex of the Hangseshwari Temple.

The Zafar Khan Gazi Mosque and Tomb is another notable tourist attraction in Bansberia. This mosque was constructed in 1298 AD by Zafar Khan Gazi. It is considered to be one of the most ancient Muslim monuments of West Bengal. This famous mosque was erected on the ruins of a Hindu shrine. One can also witness some Hindu deities on the stones of the mosque.

Kartik Pooja is the main festival of Bansberia. In this Pooja, Lord Kartik is revered on the final day of Kartik month (of Hindus). This age old Kartik Pooja tradition is now declining in popularity, however nowadays people worship Kartik mainly to be blessed with a son. The residents of Bansberia celebrate Kartik Pooja in a grand scale just like the Durga Pooja in Kolkata. The celebration goes on for 4 days in succession. Kartik Pooja is held every year in Bansberia on 16th November (if it is a leap year) or 17th November. There are several Pooja committees who organize Kartik Pooja among which Khamarapara Milan Samity Radha Krishna, Bansberia Kundugoli Nataraj, Mitali Sangha, Bansberia Pratap Sangha, Kishor Bahini and Yuva Sangha are the most prominent ones.

Bansberia people love to relish a wide variety of non vegetarian cuisines. A majority of these preparations are cooked using fish, chicken and mutton. The locals prepare a wide assortment of delicacies on various occasions. Food is a major part of all gala events and festivities in Bansberia. The finger-licking cuisines of Bengal can be enjoyed in numerous restaurants distributed throughout the town of Bansberia. Given below are some noteworthy eateries of Bansberia:

The locals of the town also enjoy taking pleasure in a variety of sweets such as Roshogolla, Ledikeni, Malpua, Pathishapta, Peethe, Mishti Doi etc. Below given are some of the most sought-after sweet shops located in the town of Bansberia in the Hooghly Dist. of West Bengal:

Bansh Baria Railway Station is the nearest rail head to Bansberia. The Tribeni Station is another rail head close to the town which is located about 2 kms from the town. Tourists can check out the nearby tourist places like Kolkata, Alipore, Howrah, Mayapur and Navadvipa. Besides, one can also visit cities like Gopalpur, Naihati, Bhatpara and Panihati all situated within a distance of 35 kms from Bansberia. All these places as well as the other important cities of India are connected to Bansberia via rail network and can be reached by local and express trains available at the Bansh Baria Rail Head. Cycle rickshaws are available as a mode of local transport in Bansberia. One can also reach the town via NH 2 from Kolkata and other nearby cities. The Netaji Subhas Chandra Bose Airport is the nearest airport to the town and is located just 40 kms from Bansberia. Those who want to reach Bansberia from different major cities of India via air can get down at the Netaji Airport and then hire a taxi to arrive at Bansberia.

Comments / Discussion Board - About Bansberia