The Anant Vasudeva Temple is a renowned shrine located in the Bansberia town of Hooghly District in West Bengal. This temple has an octagonal tower and despite of being small it looks quite elegant. The temple is embellished with terracotta works which are a portrayal of Mahabharata and Ramayana stories and Krishna Lila. The temple lies within the premises of Hangseshwari Temple and Lord Krishna is the main deity of this shrine. 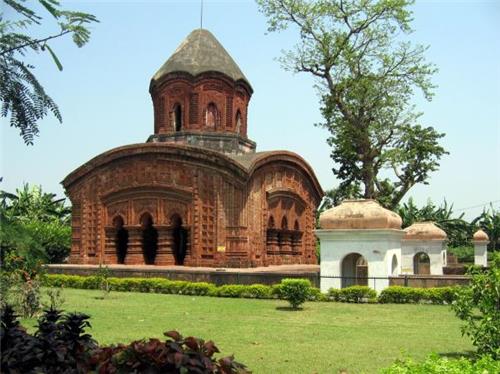 In the year 1656, Raghab Datta Roy was appointed as Zamindar of an area which encompassed Bansberia as well. As per a legend Rameshwar Datta, who was the son of Raghab Datta Roy deforested a bamboo grove to construct a fort which was named as Bansberia. Rameshwar Datta was an enthusiastic devotee of Vaishnavism and in 1679 he built the Anant Vasudeva Temple in the town of Bansberia.

Usually the temples in Bengal have 3 types of architecture- Chala Style, Deul(or Nagara) Style and Ratna( or tower) style. The architecture of the Anant Vasudeva Temple is a blend of 2 architectural styles. This temple is built by adopting the conventional “Ekaratna” Style of architecture with an octagonal shaped tower and curved cornices. 3 sides of this one-storied shrine are adorned with luxuriously carved panels of terracotta. There are terracotta carvings done on the tower as well. The layout of this attractive temple resembles the Bishnupur terracotta temples. The outside walls of the shrine are also decked out with intricate works of terracotta.


Significance of the Anant Vasudeva Temple

Since this kind of terracotta temple was a very new and unique feature in the 17th century, it ought to be astonishment for the visitors of that period. The temple has definitely inspired many craftspersons who have later built many other temples in the neighborhood of Hooghly District such as the “Ramchandra Temple”(built in the 18th century) near Gupti Para is greatly influenced by this temple.The beautiful terracotta works of the temple represent the rich architecture of Bengal and hence it attracts thousands of devotees and tourists from all over the world. Presently the temple is in the hands of Indian Archeological Department. However, the offspring of the Raja Rameshwar Roy still take pleasure in all the rituals of the Pooja that are performed here.


Nearby Attractions to Anant Vasudeva Temple

The temple is a perfect weekend getaway for the locals as well as the tourists coming from different places. From the month of October to the month of March is the ideal time to visit this temple. Hangseshwari Temple, the ruins of the Datta Roy Palace, Bandel Church and the Swanbhaba Kall Temple are some famous places of attractions located in the vicinity of Bansberia. Here one can also enjoy meandering along the Hooghly River to the Ishwar Gupta Bridge.


How to Reach Anant Vasudeva Temple ?

The Anant Vasudeva Temple can be reached by taking a cycle rickshaw which is easily available throughout the Bansberia town. From the nearby cities like Kolkata one can take the National Highway 2 in order to arrive at the temple via road route.