The Hangseshwari Temple in Bansberia houses both the Shakti and Shiva deities, therefore its name has been given as “Hangseshwari”. The neighboring areas of Hangseshwari Temple abound with skillfully maintained verdant lawns. Owing to the unique shape and architecture of the temple, it stands out among the numerous temples located in West Bengal. 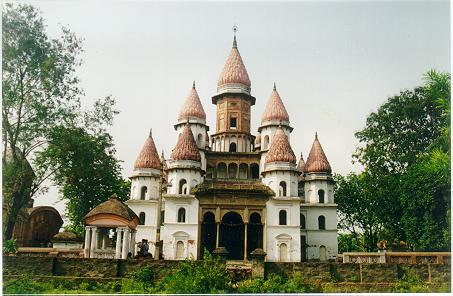 In the late eighteenth century, the son of Govindo Deb (great grandson of zamindar Raja Rameshwar Roy), “Raja Nrisingha Deb” planned to construct a temple known as the “Hangseshwari Temple” in Bansberia. Legends also say that he hired proficient artists from Varanasi to construct this temple. According to one more legend, Raja Nrisingha Deb was dwelling in Varanasi during 1792-1798 and there he acquainted himself with the “Six Chakras” and “Kundalini” that exist within the human system. It is said that after getting inspired by these concepts he decided to construct a temple in Bansberia based on the conception of Yogic and Kundalini. This gave birth to the present Hangseshwari Temple.

It took more than 1 lakh rupees to get hold of marbles from Chunar Hills located near Varanasi (earlier known as Benaras). In the year 1799, Raja Nrisingha put the foundation stone of this renowned shrine of 13 gems. However, unluckily he departed in 1802 in the middle of the temple’s construction. There were only 2 storeys that were completed by that time. The pending work was finished by his wife Rani Shankari, in the year 1814. The time and date of the establishment of this temple have been inscribed in Sanskrit and can be seen on the temple’s body.

The structure of the temple comprises 13 peaks and each tower represents a closed bud of lotus flower. This type of structure resembles the St. Basil’s Cathedral (which is also famous as the “Onion Dome Church”) in Moscow. This kind of architecture is greatly inspired by the European architecture.
The internal structure and the design of the temple on the whole are influenced by “Tantra Shastra” which represents the spiritual education acquired by Nrisingha Deb in Varanasi. The height of the temple is 70 feet with the thirteen spires each having the shape of a lotus bud. The temple consists of 6 storeys. The interior layout of the temple follows the human anatomy.

The 13 spires are symbols of 5 work organs, 5 sense organs, intelligence, mind and swank of the human beings. On the uppermost storey of this temple there exists a large Shiva Lingam made of white marble and symbolizes Param Purush. The main deity of the temple, Mother Hangseshwari resides in the “Garbha Griha” (or the centre of the shrine) and represents the power of “Kulakundalini Shakti”. There is an arched entryway which leads to the sanctum sanctorum where Ma Hangseshwari’s idol has been placed on a lotus. The interior chamber is linked to the domes via thin passageways which symbolize nerves in human body. The tourists are not allowed to enter into these passageways.


Description of the Deity

Maa Hangseshwari’s idol has been made of neem wood. Shiva lies on the yantram(which has a triangular shape) and a twig of lotus emerges from Shiva’s naval. This lotus comprises 1 thousand petals and Maa Hangseshwari sits on it in “Lalitasana”. The idol of Maa is blue colored. Maa stands on her right leg and her left leg rests on her right thigh. She is carrying Kharga(or sword) in her 2 upper left hands and demon’s head in her lower left hand. In the upper right hand she is posing an “Abhay Mudra” (which signifies blessings) while in her lower right hand’s pose (Bar Mudra) denotes blessings to everyone.

Bhog is presented to Maa everyday twice. The Anna Bhog(rice along with vegetables) is offered to all the deities in the noon. Fish is prepared and is offered to Maa only. After the Bhog ritual, the Bhog is distributed among the devotees as the “Prasad” except the fish preparation. Another time the Bhog is offered to Maa in the evening as is known as the “Sheetal Bhog”. During Kaali Pooja, the deity is dressed in musk and her tongue remains out. During this grand festival twice in a day 3 animals are sacrificed and offered to Maa.


How to Reach Hangseshwari Temple ?

The temple serves as an ideal weekend getaway for the tourists and people residing in the neighboring areas. From October to March is the best time which is recommended for the people to visit this astounding temple. In order to reach the Hangseshwari Temple one needs to get down at the Bansberia Railway Station and take a rickshaw. It takes just 5 minutes to reach the temple from the station. From Bandel which is located nearby, one can take a mini bus or an auto to arrive at the Hangseshwari Temple in 25 minutes.